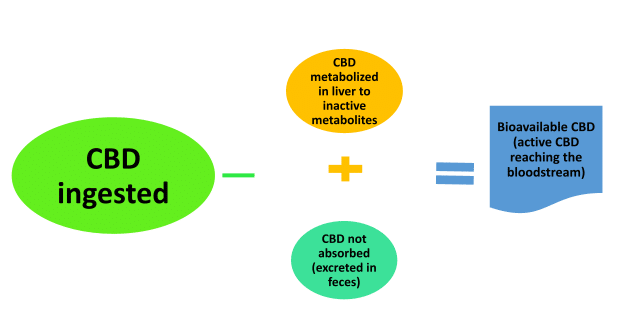 Bioavailability of Cannabinoids in Dogs

Cannabidiol (CBD) is not approved for use in veterinary patients; nonetheless, it is increasingly being touted as a therapy for a wide variety of indications in dogs such as osteoarthritis, epilepsy, anxiety, autoimmune disease, diabetes, and cancer, to name a few. There have only been a handful of studies addressing the bioavailability and/or pharmacokinetics (PK) of cannabinoids in dogs. Knowing these parameters is important because it affects how much we should give to get an optimal effect and it also informs how often we give these compounds (once, twice, or three times a day).

Bioavailability is the proportion of a drug which enters the bloodstream when introduced into the body and therefore is able to have an active effect. In humans we know that smoking or inhaling is the route that provides the highest bioavailability for CBD and THC, while oral absorption is significantly less. For CBD in dogs, since it is usually given orally, this would relate to 1) how much of the CBD is absorbed from the intestinal tract and 2) how much of the CBD is altered to a less active or inactive metabolite before it reaches the bloodstream.

Oral sprays or sublingual drops that are absorbed by the local mucous membranes provide greater bioavailability because the CBD is absorbed directly from the mucous membranes, thus bypassing the first pass effect (see below), but these administration routes are currently somewhat impractical in dogs. Bioavailability of CBD has shown to be greater in people when it is given with food versus when it is given after fasting and limited studies would suggest that the same is true in dogs.

Oral sprays or sublingual drops that are absorbed by the local mucous membranes provide greater bioavailability because the CBD is absorbed directly from the mucous membranes, thus bypassing the first pass effect (see below), but these administration routes are currently somewhat impractical in dogs. Bioavailability of CBD has shown to be greater in people when it is given with food versus when it is given after fasting and limited studies would suggest that the same is true in dogs.

Humans have a blood saturation point of 400-800 mg of CBD meaning that when more than this amount is given no more drug can dissolve into the gastrointestinal fluid to be available for absorption. Thus, increasing the amount given above this point will not increase the amount that enters the bloodstream. A saturation point has not been fully determined in dogs.

The half-life of a drug is the time that it takes for the plasma concentration of a drug to reduce to half its original value. Half-life (t1/2) is used to estimate how long it takes for a drug to be removed from the body. With chronic oral administration, the half-life in humans is between 2 and 5 days depending on dose and route of administration.1 The half-life most commonly reported in dogs is 5-6 hours or less; however, additional studies need to be conducted in dogs receiving chronic doses of CBD and other cannabinoids.

There are large gaps in our knowledge of the PK of cannabinoids in dogs. A study in the late 1980’s suggested that oral bioavailability of CBD in dogs is poor and ranges from 13-19%. This low bioavailability is largely due to first pass metabolism meaning that the cannabinoids are metabolized at a location (such as the liver) before reaching the systemic circulation or bloodstream. These metabolites are then excreted in the kidneys.

A recent randomized, blinded, placebo-controlled trial evaluated the effect of repeated administration of various doses of CBD per kilogram of the dog’s weight (1, 2, 4, or 12 mg of CBD per kg of the dog’s weight), given orally on the pharmacokinetic profile of CBD and 2 of its metabolites. The study also interrogated the safety profile of these doses of CBD when administered to dogs once daily for 28 days. The authors concluded that once-daily oral administration of CBD in an MCT oil carrier for 28 days was well tolerated by healthy Beagles. Veterinary examinations revealed no clinically important abnormal findings throughout the study, and no clinically relevant changes were noted in complete blood count, serum biochemical parameters, intraocular pressure, tear production, electrocardiogram, or urinalysis data or motor activity. Importantly, while there were increases in one liver enzyme (serum alkaline phosphatase; ALP) in this study, similar to what has been reported in client-owned dogs with osteoarthritis given 2 mg/kg twice daily for 4 weeks, dogs with high values of ALP were clinically normal and none of the other markers of liver disease/function (i.e., serum aspartate aminotransferase, alanine aminotransferase, γ-glutamyl transpeptidase activities and total bilirubin concentration) were abnormal. In another study of transdermal and oral CBD in dogs, diarrhea and elevations in serum ALP levels were noted but were of unknown clinical significance. The most common side effect in these dogs was hypersalivation both before and after administration of the CBD oil. A steady-state plasma concentration was reached approximately 2 weeks after administration of CBD began in this study.

In another study, a CBD-predominant oil consumed via escalating doses up to 62 mg of CBD per kilogram of the dog’s weight led to only mild adverse signs and no moderate or severe adverse events. Importantly, the number and type of adverse events that occurred in the CBD oil group were comparable to the corresponding placebo group (MCT oil). This outcome suggests that the CBD isn’t causing the gastrointestinal adverse effects and it may be caused by the carrier oils which include MCT oil. Not surprisingly, dogs did not tolerate products containing larger amounts of THC as well as they tolerated CBD-predominant oil formulations. The authors also noted that CBD and THC could be detected in plasma 1 week following administration of the final dose of the product.

While several studies have now demonstrated the efficacy of CBD in dogs with osteoarthritis and seizures there are many unknowns regarding absorption and metabolism of CBD in dogs. The therapeutic response of a dog to CBD likely depends on a number of factors including how long it is administered, route of administration, whether the CBD is given in a fed or fasted state (or given with food), the effect of liver or kidney dysfunction or concurrent medications on CBD metabolism and excretion, the dog’s body composition, the severity of the disease that the CBD is being given for and its chronicity, the dog’s breed, age, and sex, and other factors that we are just beginning to understand. While a few studies have been done in client owned dogs, most of the published studies in veterinary medicine have been done in Beagles. While these studies are informative, they leave unanswered questions regarding differences in CBD bioavailability depending on breed, age, and environment.

Unknowns include whether there are differences amongst canine breeds in the absorption or metabolism of CBD, whether CBD accumulates in fat (and therefore may have a prolonged action in obese dogs), and whether there is a difference in bioavailability depending on whether the dog is young or old, female or male, or overweight, normal weight, or underweight. Additional studies are needed in client owned dogs to elucidate what dose is optimal for the various indications (is the dose required for anxiety different than that required to alleviate discomfort associated with osteoarthritis or to reduce or prevent seizures in dogs with epilepsy). Much research is needed before we fully understand the pharmacokinetics of cannabinoids in dogs.

We are here to help! Call or text us at (413) 367-7867
Contact Us
PrevPreviousWhat’s the difference between CBD oil and Hemp Extract?
NextDr. Ray Gandolf’s dog is happier with Dr. Fossum’s productsNext